“It became more about the party and less about the art.“

The Chop Shop exploded onto Lonsdale Street with its campaign ‘Can’t Stop The Chop,’ a rebellious roar from Canberra’s hipster community and a defiant push through the red tape that threatened to stifle Canberra’s underground skate, street art & hip hop movement. At the front of this almighty roar was Sancho Murphy, the humble champion of the struggling artist and one of the true pioneers of this movement in Canberra.

While The Chop Shop may have ended up supporting the party as well as the art, what it unearthed was a youth culture busting to have a public place where they come together, express themselves, and party. “The Chop Shop kind of evolved into what it did, and I guess it turned out the way it was supposed to. It became more about the party and that kind of dictated the direction of the events. There were a whole bunch of other events I wanted to do, arts focussed events, that we just couldn’t fit into the timeframe.”

Sancho is all about the art. She has a self confessed ‘thing for activating dead spaces’ and promoting emerging talent in an ‘organic, ego free environment’. Her feelings about where the Chop Shop ended up are not so much disappointment, it was more about starting out with a vision and seeing that vision turn into something else because it embraced a youth culture that simply wasn’t being tapped into. It was like opening a big can of hipsters and watching it explode all over your dreams.

“I remember a few nights thinking ‘this isn’t what this venue is about’. I was lucky there was only about 30 percent of that but it was happening a lot towards the end and I was like ‘nooo… my baby’.”

This baby was not conceived over night. The road to the Chop Shop started way back when Sancho was Fresh out of the ANU School of Art and still confused about what she wanted to do. Sancho did the retail thing for a while, working in camera and music shops eventually going on to do band merch as a senior sales rep for Sydney based company Out With the New and Playbill. Immersed in the hip hop scene, working for acts like Hill Top Hoods, Dallas Crane, and “Anyone in hop hop who came through Canberra really,” Sancho eventually tired of the lifestyle and took off overseas to recharge her creative batteries.

While overseas, Sancho visited some ‘really cool T-shirt skate shops in LA and San Francisco’ and was keen to bring this kind of flavour back to Canberra. Not having the capital to start working on her dream, Sancho wrote the idea down in her ideas book and took a public service role with the Royal Australian Mint as a Junior Product Development Officer. Bland as it may sound this experience gave Sancho some solid knowledge on manufacturing and business operations.

Then around three years ago, Sancho won a promotion run by Lonsdale Street Traders to fill an empty shop-front put her dream of running an indie T-shirt and skate lifestyle shop into action with her store Sancho’s Dirty Laundry.

“There is this undercurrent in Canberra of all these skaters and artists applying graphics to T-shirts and just selling them out of their boots at festivals, at markets… it’s a really honest product and I thought it would be cool to promote that.”

Sancho’s Dirty Laundry was the first real platform the indie street, skate and tattoo art scene had to gain exposure in Canberra. It became a sticking point where these independent artists would come together, meet each other, and share ideas. The events that came out of the store that would ultimately lead to the opening of The Chop Shop were Up Your Alley–a live painting event at the Traders, and an underground demolition house party.

“After we did the street party Up Your Alley, I was approached by a young guy, Pat Rose, who I ended up partnering with to do The Chop Shop. He wanted to launch a T-shirt label in an old share house that was going to be demolished and the landlord had given him permission to spray paint the walls. Pat said ‘hey do you want to do a similar thing to Up Your Alley in this house, with my T-shirt label, we’ll set up a stage in the backyard, paint the walls…’ and I was like ‘Hells yeah.’ It was pretty much the coolest underground event I have ever done.” Sancho has a knack for gaining support, people want to jump on the projects she is doing because she comes from a place of authenticity. Its not about the hype, its not about trying to be cool, or something she’s not. It’s about the art, representing artists who deserve promotion, and making cool things happen. In the case of this humble house party they gained sponsorship from Trinity Bar, Magna Cider, Beach Burrito, a security company ‘so it was all like legit’, they even managed to secure spray paint sponsorship. Hells yeah indeed.

“All the artists came together and we totally transformed this house. It was a really organic, ego free zone. The most innocent pure event I had ever been involved in. We thought wouldn’t it be cool if we found a venue where we could consistently do that, like once a month.”

At that stage, Nik Bulum had approached Sancho to do something in the mechanic shop next door to The Traders, “He knew I was into doing that kind of thing. He told me the mechanics are moving out and asked if I want to take on that space?”

What was originally supposed to be a studio space and art gallery, evolved partly into a bar as a way of generating income without taking commission from the artists or charging high rents for the studio space. And so The Chop Shop was born.

“Through the process of the Chop Shop I figured out I am going to be super selective with who I work with in the future. I think there are people who are just kind of there to live off the scene–people I like to call lifestyle artists, who aren’t actually artists but like to use the title. Then there are the real artists who you very rarely see at a party because they are at home busy working on their craft. They’re the ones I want to work with.”

The Chop Shop was always going to close. It was a pop up space, an opportunity that came up and served as a great learning experience for all involved and unearthed a previously untapped, underground scene. Sancho’s network grew and her name as the ‘Queen of Cool’ in Canberra was cemented–she would probably hate this label, and even cringe a little, but mention Sancho’s name to those in the know, and the common response is “Sancho is cool, she does really cool things, can you put me in touch with her?” Sorry Sancho, it’s already out there.

So, what has Sancho got on the boil right now? A new space to be sure, but this space is going to be closer to the original vision of The Chop Shop and include the artists and vibe that got lost in the hype of The Chop.

“I met a lot of independent record labels, people putting gigs on in their houses because they couldn’t afford a venue. There was a whole bunch of artists I couldn’t fit into the programme at The Chop Shop because the timeframe was so tight. They’re the people I have kept in contact with that will bring the kind of vibe I want upstairs to be. I already have a loose calendar of events in the works, I’m just waiting for the final papers to come through so I can start actioning it.”

The lofty new city space is anticipated to kick off in Spring and will be a collaboration with Sancho’s Dirty Laundry and long time supporters Beach Burrito. Beach Burrito will run a bar alongside an experimental micro performance, arts & retail space. The vibe will be 80s skate with lots of neon, graff and Sancho’s special brand of street flavour.

“I feel like there are these different levels of street artists in Canberra. There are the ones who know how to market themselves in this really PC way, they know how to talk to government departments and their art is ‘safe’. But then there’s this undercurrent of youth and sure they look a bit rough around the edges but the stuff they are producing is way more poignant and honest. They are still not getting the opportunities because they are not good at promoting themselves or finding these networks, and I hope that’s where I can make the difference.” 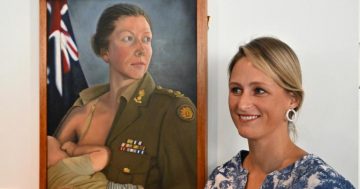 Life for a mother in today's military - the true picture Here's a crafty idea: show your artistic side with some perfect recycling