Legendary Australian documentary photographer Stephen Dupont has produced a new body of work that is now online which details the damaging effects of climate change on his country.

Stephen has spent a lifetime exploring some of the most dangerous locations and damaged social environments in the world. Prevented from undertaking world travel by COVID-19, his latest exhibition ‘Are We Dead Yet?’ examines the troubles Australia faces from a very different existential threat: climate change.

A renowned war and conflict photographer, Stephen has always retained a passion for photographing people on the fringes of society. But in his latest exhibition, he has largely photographed the land and the environment in an effort to ask questions about whether we might survive what many see as the world’s biggest challenge.

The photographer says he was inspired to tackle this project partly by his daughter, Ava, who is a climate activist. Stephen Dupont is known for his photos of dangerous situations abroad, but his latest exhibition ‘Are We Dead Yet?’ looks at the dangers from climate change in Australia. Photo: Stephen Dupont.

Stephen presented a series of 20 of his works in a physical exhibition at the ANU’s Kambri precinct aMBUSH Gallery from mid-July 2021 to the first week of August, but the show can now be found online here.

The images are produced in colour, although much of Stephen’s previous work has been shot in black and white.

“As a concerned photographer who usually covers wars and natural disasters in faraway places, in 2019 I was faced with the realisation this is now personal,” he says.

“An unprecedented tragedy was unfolding in my own country, literally in my backyard, and I knew people whose lives would never be the same.” Stephen photographed his latest series during the past few years across Australia’s eastern states of Tasmania, Victoria, NSW and Queensland. The images feature drought, bushfires and floods, as well as including some of the ordinary citizens who have been affected by these momentous events.

They ultimately raise the question, “Is it possible to still save our planet?”

Stephen outlines how he covered these momentous events and the impact they had.

“Bushfires are unpredictable,” he says. “They are determined by land formations, wind direction and temperature. They move quickly with devastating effect. One minute you’re in a world of quiet, the next a thundering sound like an out-of-control freight train is upon you.

“The light is intense and moves unnaturally from day to night, from moment to moment, then to something not of this world. “It’s the light that drives my vision. An artist’s dream colour palette, the light transforms the entire landscape from yellow to burnt orange, to blood red to black. I was often alone in forests, deserted towns or lost highways, and the sensation I felt was unsettling and frightening, yet beautiful, too.

“The light moves fast and you need to move with it. I found myself being drawn into surreal-looking landscapes, devastation and human trauma. Many of those who had stayed behind wandered around in shock, some panicked, others defending their homes and confronting the fire itself.

“The problem is we’re living in a world of lies and blackmail. We are being led astray in many ways and I think if you just look at nature it’s telling us that.

“I think [nature] is our most objective journalist. We are going to be the template for the whole planet so it’s really interesting to look at what’s happened in the past two or three years with bushfires, floods, drought and now the mice – it’s just one disaster after another.” The Black Summer bushfire left a lasting impact on Stephen.

“The bushfires in 2019-2020 are embedded in my memory like none before – a long drought and a sunburnt landscape waiting to ignite,” he says. ‘It caught the nation by surprise. In swept westerly winds and blistering temperatures, and then the fires.

“From Queensland to Victoria, the coastline was engulfed by hundreds of raging infernos. We are used to fires in this country, but I couldn’t recall anything on this scale and with this ferocity.”

Stephen believes people need to accept the evidence presented in front of them and educate themselves.

“We’re not going to have a planet to live on if we don’t do it – that’s the bottom line,” he says. “It’s really the ‘second before midnight’ and if we don’t do something it’s a ticking time bomb.”

Stephen Dupont’s ‘Are We Dead Yet?’ exhibition is available to view online at Kambri at ANU.

He was editor of Australian Photography magazine for 16 years, and produced documentary images on the inaugural seasons for AFLW teams Collingwood and St Kilda.

He also spent a year driving through the US while writing about and photographing his adventures. His stories and photography can be viewed here.

Original Article published by Robert Keeley on The RiotACT. 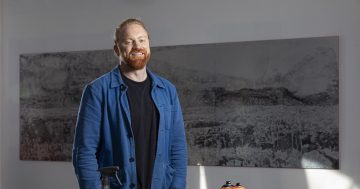