Gill Cummins’s truffle dogs Solley, Pepper and Ruby are ready to get to work on local truffle farms in June. Photo: Gill Cummins.

As the shortest day of the year approaches and the winter chill sets in, there’s one thing that will warm the cockles of the hearts of Canberra’s culinary fraternity – truffles.

Winter solstice – this year falling on Monday, 21 June – marks the official start of truffle season, a short window of opportunity to pluck a prized piece of “black gold” from the earth in regional Australia.

It’s no accident that truffle farms across the ACT and Southern NSW come alive with foragers during the 10-week season. With a climate similar to the famous truffle regions of Italy, Spain and France, local growers are well placed to turn out perfect specimens of Tuber melanosporum, otherwise known as winter black, or Perigord, truffles. They’re not the prettiest, but black winter truffles are highly sought after. Photo: Michelle Rowe.

Even better, connoisseurs don’t need to travel for hours to get their hands on them, with some of the region’s most productive truffle farms right on our doorstep.

Dick Groot Obbink, who owns Durran Durra Truffle Farm near Braidwood, is president of the Canberra Region Truffle Festival Association, which has been celebrating the fungus since 2009 through its annual truffle festival.

Truffle tastings, hunts, gourmet dinners and tours make up a winter festival that’s a boon for regional businesses during the off-peak season. Dick and his wife Virginia’s farm, set against the stunning Tallagandra Range on the NSW Southern Tablelands, will run truffle hunts on Wednesdays and Fridays throughout this year’s The Truffle Festival – Canberra Region. “People really like the whole experience,” Dick says of the events that kick off on 9 June before the official start of the season.

“We’ve packaged ecotourism with the hunt, giving people a bit of background on our journey and why we started to do this. They get an introduction to the dogs, are shown how they detect truffles, how we wash and handle the truffles, and there’s a tasting as well.”

Dogs, of course, are a big part of the attraction.

The 2020 film The Truffle Hunters, featuring a quirky band of elderly Piedmontese truffle hunters, depicted the deep bond between the men and their dogs, whose exceptional olfactory skills have long been responsible for their livelihoods.

“I can relate to those guys,” says Gill Cummins, a Crookwell-based contract truffle harvester who loads her trusty team of dogs onto the back of her ute and sets them to work at farms across the region during harvest season. The lead dog is Pepper, a German shorthaired pointer whose dedication to the job is matched only by her enthusiasm for the rewards of her labour – exclusive use of a squeaky toy and some choice slices of cabanossi. Gill also has a kelpie-blue heeler cross called Ruby, and a black and tan kelpie called Solley on the ‘payroll’. Two youngsters, six-month-old kelpie Henry, and 12-week-old springer spaniel Bailey, are in training.

“The jury’s still out on Henry,” says Gill. “He was going to be a sheepdog but didn’t show any interest in sheep.” Truffles seem to be more his thing, she says. Clever boy!

During the hunt, the dogs will sniff out a truffle and indicate its location to Gill. Most of the time, they’re spot on.

“Pepper will give a tap on the ground [to show she’s found a truffle]; Solley and Ruby will scratch the ground. I don’t know what Henry’s going to do.”

The scent of truffles is all-important, says Wayne Haslam, whose Blue Frog Truffles farm in Sutton uses Gill and her dogs for its public truffle hunts during the festival. And he’s adamant that the aromatics of truffles from south-eastern Australia are far superior to any of those produced across Australia. He adds that among the thousands of truffle species in the world, there are more than 100 native varieties of truffle around Canberra, “but the ones that have culinary value are the ones we can smell. And there are only about six of them, with Tuber melanosporum having a strong aroma, being easy to cultivate and the best value in the kitchen”.

Gulaga Gold is the first truffle orchard on the south coast of NSW and sells truffles to restaurants from Berry to Pambula. Owners Fiona Kotvojs and Alan Burdon will launch truffle hunting experiences on their Dignams Creek farm, between Tilba and Cobargo, for the first time this year. Fiona Kotvojs with a basket of truffles from her Dignams Creek truffle farm. Photo: Supplied.

Fiona says the beauty of truffle farms in eastern Australia is that they are smaller, mostly family-run affairs, offering flavours unique to the area. And they are great for local tourism.

“On the south coast, winter is our quiet season, so having something like truffles brings people down here and gives them the opportunity to discover what’s here. In my opinion, winter is a nicer time to visit than summer – it’s quieter, not as hot, the air is clearer so when you walk along the beaches you get some stunning views.” Pepper, the truffle dog, has a nose for business. Photo: Gill Cummins.

Truffles have also been the impetus for new business opportunities for local farmers.“One of the things we saw is that there’s a number of people who have just a few truffle trees, and they can’t get anybody to check their truffles,” says Fiona, who is now training local dogs whose owners will have the chance to earn a little money through truffle hunting at farms that don’t have the means to do it themselves.

“We also have a local business now making truffle oils and salt, and hopefully truffle mustards and balsamics soon. During our truffle hunts, we give people real truffle oil to try so they can compare it to what they buy in the shops. Once you’ve tasted the difference, you will never go back to the artificial stuff again.”

Truffle hunts book out quickly each year, says Wayne, and with more Aussies venturing into their own backyard and putting their money where their mouth is to spend locally following COVID, there’s no sign of the truffle rush slowing.

If Wayne and Dick have their way, truffles from the Capital Region and surrounds will eventually become more famous and sought after than their rivals across Australia. Blue Frog Truffles in Sutton has been planted with oaks and hazelnut trees. Photo: Michelle Rowe.

Together with a handful of other dedicated, small-scale growers, the pair have formed the EAT Truffle Cooperative, which aims to build economies of scale, a collaborative approach to sales and marketing, and eventually, a strong regional truffle brand, helping push Australia, and in particular south-eastern Australia, to the top of the tree when it comes to truffle production and sales.

“After little more than 20 years of production, Australia is the fourth-biggest truffle producer in the world after Spain, France, Italy, but competition from Chile, Argentina, South Africa and Israel is starting to grow.

“We’ve been struggling for years to get collaborative, collective marketing. Working together [to build a strong local brand] is a no brainer. And tourism plays a big part in all of it,” says Wayne. 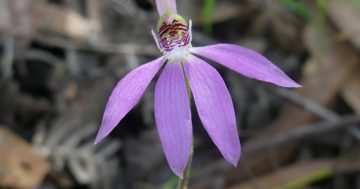