Expect the unexpected: your guide to the Canberra Unscripted Festival Back for its third year, the Canberra Unscripted Festival is set to take over The Street Theatre from Thursday 19 to Sunday 22 September.

Across four days, six shows and ten performances, this year’s program explores comedy, music and improvised theatre, taking audiences away from their curated lives and thrusting them into the fun, hilarity and emotion of improv.

Not sure where to start? We’ve broken it all down it for you right here.

For the first time… scripts!

Wait, what’s this? Scripts? Don’t worry, the performers won’t be too comfortable. Script Tease sees four local playwrights providing the first scenes to four different plays. Canberra’s premiere improv troupe, Lightbulb Improv, are then tasked with taking these scripts and seeing them through to whatever endings they see fit.

“The Lightbulb team really can spin gold out of anything,” says Laura Griffin who will be supplying a script for the night. “I hope to see the players feeling challenged but having fun with the characters and the situation.”

Script Tease is the perfect way to dip your toes into the improv world, with just enough structure provided to let the prowess of each performer shine through.

That said, if you really want to see actors get experimental without completely abandoning their tether to the stage in the conventional sense, Sunday afternoon’s The Adventurers is a great way to go about it. A Roll For Intelligence-style faux Dungeons and Dragons adventure, audience and rolls of the die inform the decisions each character will make and the fates they will meet.

Sunday night marks the closing of the festival with Canberra’s longest running improvised theatre competition. The finalists, having already faced the masses in a series of heats held at Smith’s Alternative, will be subjected to an array of improvisational tests and challenges.

Expect games, songs, and very much unplanned escapades as directors present contestants with tasks that will draw on every skill and ounce of wit they posses.

When the playing is said and done, it’s over to the audience to choose who gets through to the final round and who gets sent packing.

It’s the perfect way to wrap up what’s sure to be a hilarious weekend of performances, with familiar and new faces pitting themselves against one another in the ultimate battle of wits. Antics, shenanigans and possibly even tomfoolery are sure to ensue. Canberra Unscripted takes audiences and actors out of their curated lives and throws them into the unknown.

After dark, light of day

The Canberra Unscripted program has its share of darker moments as well. Femme Noire throws a gender-swapped cast into a reimagining of the classic noir film genre, complete with rainy streets, high sexual tension and more than a bit of intrigue.

In the later timeslot on Friday and Saturday, catch Late Night Cabernet, a one-time-only variety show billed as performances the players “only intended to show each other”. An air of mystery surrounds this after-dark show, with tension and cryptic secrets coming to the fore.

Need an antidote to the darkness and mystery? Wander in to Sunday Brunch, a dissection of complex familial relationships, all under the guise of the traditional family get-together.

Canberra Unscripted takes place at The Street Theatre from Thursday 19 to Sunday 22 September. Ticket prices for individual shows vary, starting at $19/15. Three-show packages are available for $45/39. Tickets on sale via www.thestreeet.org.au or by calling 02 6247 1223. 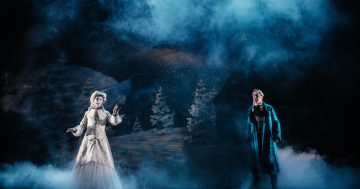