The highly anticipated Grass is Greener music festival, set to launch in Canberra for the first time this Sunday (23 October), has been cancelled.

Over the past six years, The Grass is Greener has become one of the most popular music festivals in the country, and it promised to host many national and international artists.

However, despite several artists and bands pulling out of the festival in the past week causing many changes to its line-up, organisers said it was just one of several contributing factors to the Canberra and Geelong (30 October) festivals being cancelled.

“[The cancellation is] the culmination of multiple elements that have affected not only us but our industry partners and siblings across the entire event industry in the COVID/post-lockdown period,” a spokesperson said.

“After a successful 2021 campaign in Cairns, Townsville, Toowoomba, Mackay and Gladstone, we were excited to finally take TGIG to other states and expand nationally.

“Like many others, we expected purchasing behaviour to return to pre-pandemic levels, curating a line-up that we felt our loyal customers deserved. In that time, there have been staggering, exponential cost increases across the board – from staging, production and site infrastructure to security, portable toilets and more.

“We’ve been running large-scale events for seven years and have not – during this time – seen such sharp increases within such a short period. This has drastically affected our planning to an unprecedented degree.”

The statement notes how consumer confidence has completely changed since COVID-19 affected the music industry.

“From an event standpoint, especially heading into these new markets, a festival team relies on certain milestones to enable us to run events successfully,” it explained.

“What’s more, the weather warnings we’re receiving from Canberra and Geelong have also played a large role in this decision.

“While the shows were selling slower than predicted, we still had the full intention of seeing them through – loss or otherwise. However, when coupled with the chance that sites might not even be built due to the impending weather, we knew we had to make a call as soon as possible.”

Ticket holders were alerted to the cancellation by email on Tuesday (18 October). However, concerns were raised as the email did not confirm refunds to ticket holders.

Current Canberra and Geelong Grass is Greener ticket holders will be able to use their tickets to attend the Gold Coast and Cairns festivals, as well as US rapper YG’s Melbourne sideshow on Monday, 31 October. Refund statement from The Grass is Greener. Photo: TGIG Instagram.

MusicACT director Daniel Ballantyne said it has been a very difficult time for the music and entertainment industry all over the country post-COVID.

“In the Australian music industry, tickets are not selling, festivals and artist tours are cancelling. They’re probably operating at something between 30 to 50 per cent of entertainment industry capacity, compared to prior to COVID which is just not good,” Mr Ballantyne said.

“There are certain segments of the market which are sort of okay, like a lot of small venues are not doing too badly, but these festivals that need significant sales and numbers to break even are not making it, and I’m almost certain that’s what’s happened with The Grass is Greener too.”

READ ALSO Canberra’s spitfires are out in force. But do they deserve the name?

Mr Ballantyne said he often sees festival organisers and promoters hold on to the last minute hoping that there will be a surge of ticket sales at the end, however that doesn’t end up being the case and results in artists cancelling and line-ups becoming thinner.

“When it comes to refunds in this country, most promoting and booking organisations try to meet the standards of the Ticketing Code of Practices produced by Live Performance Australia where in essence, box office revenues should be held in trust. Then, that money should be settled for cancellations or go to the organisers at the end of the event.

“The question in relation to refunds is whether or not the promoters or organisers of The Grass is Greener are committed to the code of practice. Essentially, that means that they’ve got the box office and they need to give it back, and if they haven’t done that, it’s really a civil war consumer lawyer action.”

The MusicACT director said, “The most common strategy is to postpone or to do what these people have done, which is offer tickets to other events”.

“Fortunately, there have been some pretty successful recoveries and prosecutions around Australia over the years. It is a long process, and someone who might have tickets is going to be waiting a long time,” Mr Ballantyne said.

“It’s also important to be aware that if they do refund, they’ll charge you a $5 to $7 fee as well. That’s considered acceptable because it is actually a task to refund, it’s not easy, but I still think they might be making money out of that.” 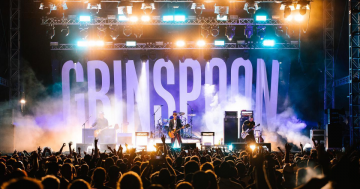