Through music, Maureen Du Toit is transported back to better times according to her daughter, Diane. Photo: Rotary ACT.

The first time Diane Du Toit saw her mother, Maureen, put on a headset that filled her ears with her favourite music, she burst into tears.

The headset was organised thanks to an initiative from the Rotaract Club of Canberra, which has partnered with Goodwin Aged Care for the delivery of the sets to their residents.

The initiative is backed by science that has found for people suffering from dementia, music is able to stimulate memory, calm them and instigate a conversation.

READ ALSO Brumbies back a good feed for Fair Canberra

After listening to the music, Maureen is better able to converse and communicate with her family.

“Even though it is such a small thing, it can really mean quite a lot to so many of us,” says Diane.

“She can’t see properly or hear properly, but the music takes her back to the good times.”

Each of the headsets are loaded with the recipient’s favourite songs, chosen by a family member.

“The first song I picked was I Drove All Night by Roy Orbison,” says Diane. “This was her and my father’s song that they used to listen to when they’d go driving.”

Other songs chosen were Memory from the musical, Cats; Over the Rainbow from The Wizard of Oz; and songs by Julio Iglesias.

“I also included As Time Goes By because that song was always played in her favourite TV show [of the same name],” says Diane.

Maureen always loved music and to dance, but now that she’s in a wheelchair, she’s less able to do so.

The first time Diane saw her mother listening to the music through the headset was emotional.

“She had her eyes closed, totally immersed in it and she lifted her arms above her head, which I call ‘ballet with her arms’,” she says.

“Her face lit up and she started singing – totally off key of course – because she had the headphones in.

“The only way to describe it was complete and utter delight.”

Diane first heard about the program in the Goodwin Aged Care magazine, and from there she simply contacted organisers to see if it was possible to get a headset for her mother.

Now she finds that having the music can often help to calm down her mother when she is agitated, as people with dementia can often become when they can’t remember a word.

Rotaract Club of Canberra treasurer Linnea Eriksson, who is an acoustic engineer, came up with the idea.

“We want to improve people’s quality of life,” she says. “With the feedback we’ve already received regarding the joy and serenity it has brought, we can’t wait to carry the work forward.”

The initiative has been received better than they could have hoped for with aged care facility staff reporting the profound impact it has had on residents and their families. 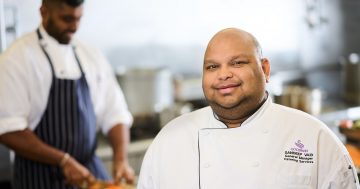