The many ways of using sourdough bread were celebrated during a dinner at Kingston on Thursday night. Photos: Thomas Lucraft, Region Media.

The food rescue charity OzHarvest says bread is one of the most wasted foods in Australia, but here in Canberra, a passionate group of chefs and bakers are making sure that every slice is treated as sacred.

The team at Three Mills Bakery in Canberra is going against the grain of food wastage by rediscovering the joys breadmaking, particularly with the rise and rise of sourdough.

Three Mills Bakery owner Jarrod Deaton and his team of bakers, chefs and collaborators knew there was more to the humble sourdough than just a healthy starter yeast, flour and water.

Last year, they launched their sourdough cookbook Beyond Bread and Butter, funded via a kick-starter campaign. Now, they are taking the joys of sourdough to the masses by encouraging people to learn more about the age-old process and how to use sourdough for more than toast and sandwiches.

Last week Three Mills hosted a dinner at the Winning Appliances showroom in Kingston where their ever-growing network got down and doughy.

Attendees learned about the 12 methods for making a variety of sourdough at home, as well as recipes to use fresh bread and old, including stale loaves for sourdough ice cream, sourdough pasta and sourdough skordalia. “There are so many things you can do with a loaf of sourdough,” says Three Mills chef Zoe Young.

“Tonight we did a dessert that’s actually not in the cookbook, it shows there’s elements from the cookbook that you can easily change and make them your own.”

Zoe said while some bread wastage is unavoidable, they are constantly finding new ways to use old loaves.

“A stale loaf of rye bread can be turned into a crumb that goes on top of a rye mousse that is made by soaking all the old bread in cream.

“We’re making a lot of bread chips and croutons, which is super easy for people to do. So long as they’re in an airtight container, they last for a long time.

“There is always going to be a little bit of waste, but if we have any bread leftover it goes to co-ops or farmers who pick it up to feed to their animals.”

Zoe said they have a licence to push the limits of sourdough by incorporating it into dishes that feature miso, custards or even dehydrating a whole loaf of bread and turning it into a flour which is used in some of their pasta recipes or shortcrust pastry.

“There are no limits, really,” says Zoe, whose career as a chef has also been reinvigorated by the many uses of sourdough.

“I love taking something that is underrated, especially in an age where you can go to a supermarket and buy cheap bread that has almost no nourishment. We take this loaf that is sour from all the air bubbles in it and make it an experience.

“One of my favourite childhood memories is waking up to the smell of bread being made. I still love it,” she says. Baker Justin King has been with the Three Mills team from the beginning. He also loves the smell of fresh bread in the morning and is happy to share what makes a good starter.

“This is the key to it all,” says Justin, holding a jar of yeast starter culture, made by combining flour and water and letting it sit for several days where wild yeasts in the flour grow.

“We use half wholemeal spelt flour and wholewheat flour, which gives off plenty of enzyme activity and produces carbon dioxide when it starts to grow.

“Our starters can go for three or four days before we need to feed it again with more flour, but we regenerate every day as we use about 10 kilograms of it every day. Some days, we use 150 to 200 kilos of the starter.

“Our mix is about 20 per cent starter to the rest of the ingredients in each sourdough loaf.”

With the value of wasted food estimated to be more than $20 billion a year, Zoe says the team at Three Mills is doing their leaven best to make every crumb count.

“We’re just trying to make people more aware of how you can just add one element from bread and be a bit more sustainable by incorporating it with native products. That can make a huge difference at the end of the day.” 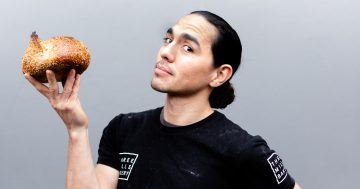 Hot in the Suburbs: L'épi Artisan Bakery brings a taste of Paris to Chisholm