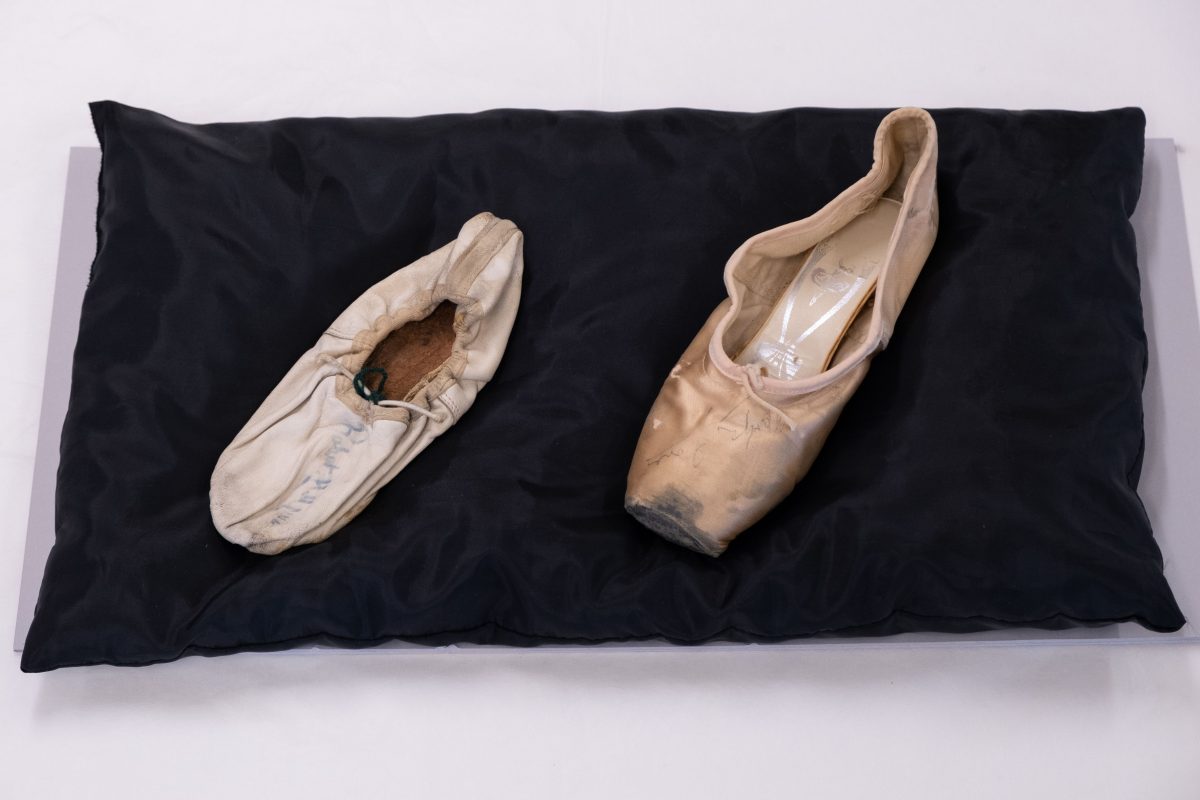 When Cathy Adamek opened a filing cabinet in the storeroom of the Ausdance Canberra office she couldn’t believe her eyes.

Wrapped in plastic were two ballet shoes: one flat, the other a pointe shoe, but what really grabbed her attention was what looked like scribbles on the mismatched shoes.

On the flat shoe: Robert Helpmann. On the pointe shoe: Marilyn Jones. Together, they are artefacts of two of Australia’s greatest dancers, albeit a generation or so apart.

“I was so excited when I saw them,” said Cathy, the ACT Director of Ausdance.

“I knew exactly what the signatures were because my mother had Helpmann’s autograph so I knew what it looked like … I called out to my colleagues in the office, ‘hey, look what I’ve found!’ We couldn’t believe it.

“They were in the storeroom where we keep lots of Ausdance archives, like old catalogues and posters dating back to the 70s.

“I don’t think the filing cabinet where I found the shoes had been opened for a while. We really don’t know how long the shoes have been in there or where they came from.”

READ ALSO: More than a damn good haircut at The Locker Room Barbershop

It seems all the stars were aligning when Cathy made the discovery. She immediately contacted the Vice-President of Ausdance National, Julie Dyson, whom she knew was organising a treasure trove of Ausdance material to donate to the National Library of Australia’s performing arts collection – 240 archive boxes worth of Australian dance history and growing.

“When I told Julie about the shoes, we thought what a great idea it would be to donate the shoes as well – it really was perfect timing.”

The handover took place on Tuesday (3 May), which also happened to mark Dance Week 2022. Director-General of the National Library of Australia Dr Marie-Louise Ayres received the shoes, which will now be studied by the Library’s conservation staff to check their condition.

Dr Ayres said the Library’s dance collection allowed visitors to explore dance in every way possible, except perhaps through performance itself.

“Sir Robert Helpmann and Marilyn Jones were incredible artists and we’re thrilled by this latest addition to our dance collection,” she said.

“Performing artists who want to walk in the footsteps of these great performers will be enchanted and inspired by these shoes.”

Although both shoes had been well worn, Julie Dyson said they were still in decent condition with the signatures clearly legible. She said it was common for dancers to sign shoes as it was, admittedly a few worlds away, for footballers to sign footballs, but that the Helpmann shoe, because he died in 1986, was “relatively rare”.

“In many ways, it was good they were hidden away in the filing cabinet for what could have been about 20 years away from the light,” Julie said.

“Their condition doesn’t seem to have deteriorated and it’s so wonderful that you can still read the signatures.

“What we all would love to know is how they got in the filing cabinet in the first place,” she said. “Maybe someone connected to Ausdance gave them to us for safe-keeping. If anyone does know, we’d love to hear from them.”

Both Julie and Cathy said they were delighted the shoes would be kept for safekeeping at the NLA.

“We know they will be looked after and it’s the perfect place for them to go with all the other archive material we have donated about Australia’s rich dance history,” Julie said.

“It will all stay together, looked after in the one place.” The donation also comes as the NLA showcases the nation’s rich theatrical history in its latest exhibition, On Stage:Spotlight on our Performing Arts, with Sir Robert Helpmann, dancer, choreographer, director and actor, the face of the exhibition.

The exhibition includes stories from in front of the stage as well as behind the scenes, looking at artists running the full gamut of Australia’s entertainment industry, from rockers ACDC to Dame Nellie Melba, Bangarra Dance Theatre to Peter Allen.

The free exhibition runs until 7 August 2022.