It has made it onto murals, postcards and even the sacred fridge magnet. There’s no denying Telstra Tower’s place as an icon of the Canberra skyline, but could it be more?

When it rose from the top of Black Mountain in the early 1970s, the 195.2-metre tall tower played a vital telecommunications role for Australia’s biggest provider, but as technology marched on, it took more of a back seat.

It famously housed a revolving cafe with staggering views over the city until 2013 when it was closed due to safety concerns, but its two viewing platforms and a heritage exhibition in the foyer stayed open as one of Canberra’s most popular tourist destinations.

But even this has stopped. It’s now closed while Telstra “upgrades the building interior”.

The ACT Government asked the community in 2019 what these upgrades should look like, but then COVID-19 arrived and the issue fell off the priorities list. So we picked it up and your responses came through loud and clear – here’s what you told Region:

1. Revolving restaurant by day, nightclub and casino by night

Sally says it all: “We were SO disappointed when we’d climbed Black Mountain and went to Telstra Tower only to find an ice cream bin.”

There’s a clarion call for Canberra’s highest eatery to return in one form or another.

“The revolving restaurant should be restored and the viewing areas fixed up with a nice cafe and gift shop,” Shelley says.

“Also, some of the outdoor areas could include some nice seating and tables during summer.”

Greg agrees: “Bring back the revolving restaurant – it used to be such an outstanding fine dining restaurant.”

Angela says the venue could also be hired out for weddings, VIP events and other functions.

READ ALSO Canberra’s spoken! These are the best places to grab a hot chocolate

Adam suggests a “funky bar with live music”, while Carolyn takes it a step further with a “revolving nightclub”.

“It could be a cocktail bar during the night and a coffee shop during the day. We could also have pop-up shops and markets in the car park below.”

Hernan goes all out with the two different floors open to varying moods of dance music: “Add a laser show emanating from the tower to advertise to the city that a gig is on.”

There may have also been a call for the Canberra Casino to relocate here, with the revolving part of the tower becoming the “world’s biggest roulette wheel”. Finally, a room with a view. Photo: File.

Think about it – your room would have a genuine view for once!

Chez says the tower could house “unique and prestigious” rooms with the best lookout over Canberra: “A little like the Jamala Wildlife Lodge at the zoo that is a treat to stay at, rather than a common hotel room.”

Others mentioned how it could be divided up into rooms and rented out through the likes of Airbnb.

Possibly in a similar vein, Kane suggests it become a retirement home for Telstra executives, “complete with a dedicated revolving floor with perfect views of the people they failed. Repeat every hour to rub it in!”

Jason says the view should be matched by a museum all about the history and development of the capital city, while Alix suggests it take on an Indigenous colour: “A gorgeous viewing cafe serving local bush foods along with an art space and shop showcasing local Indigenous artists.”

READ ALSO It’s been a blooming long time, but you can tiptoe through Tulip Top Gardens again

With a ban on petrol car registrations looming in 2035, Colin has an idea: “Use Telstra Tower as a Zeppelin Airport for all of the zero-emission zeppelin’s that the ACT Government will soon mandate to replace jet travel.”

A dock for Canberra’s SkyWhale and SkyWhale Pappa also came up. Pilots wouldn’t want to get too close to the pointy bits, though.

The tower has already earned a reputation for its syringe-like shape, but could this have a point? Queenstown in New Zealand has gondolas and a go-kart track. Why can’t we? Photo: Skyline Queenstown, Facebook.

Skyline in Queenstown in New Zealand has gondola rides and bungee jumps. Why can’t we?

“It could be a station for cable cars that take you across the lake to Commonwealth Park – we can call it SkyWrale,” Penelope says.

Keith suggests the line go past the Botanic Gardens and Tanya to the Arboretum. Meanwhile, Simon wants a flying fox running all the way to Mount Ainslie. You’d want to hang on, though.

Or, as Eric suggests, “an insane spiral waterslide down from the top”.

“It’s also a top location for a ballistic flying fox down to the National Museum of Australia. Also bungee jumping.”

“A functional centre with souvenir shop, rotating eatery and cable cars would be fantastic. I’d love to take my family there and show off an icon of Canberra with pride instead of a tower that has nothing to offer.”

There were many suggestions about another Belconnen Owl – this is the suggestion we can publish: “Turn it into a second and much larger Belco Owl statue.”

Conrad, we thank you for your restraint. To everyone else, TSK TSK.

“In every city I have been to where there is such a tower, they have always been amazing and profitable tourist attractions,” Cathy says.

“Having an information centre, souvenir shop and affordable family-oriented cafe should be a no-brainer. The addition of a revolving restaurant and function centre would also turn this squandered resource into a special-occasion destination.”

Dawn says at least the viewing platforms have to reopen.

“It is the best view of Canberra!”

Telstra Tower management declined to comment on its plans. 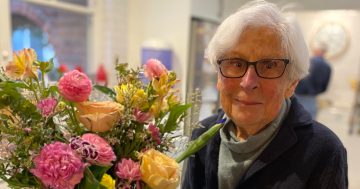