Tiny Srejic at Lennock VW with the car he’ll be giving away to a top charity fundraiser. Photo: Michelle Kroll.

Tiny and Elaine Srejic will step away from their beloved Green Shed at the end of this month, but that doesn’t mean they will be taking a break.

There’s an audacious project to raise more than a million dollars for charity in August. There’s a brand new car to be won by a lucky fundraiser. There’s even an advertisement featuring comedian Akmal Saleh.

There’s never a dull moment when Tiny is at large.

While the Green Shed will motor on under the steam of Charlie and Sandie Bigg-Wither, Tiny is taking on more fundraising challenges to help Canberra charities who have seen most of their fundraisers cancelled.

Evidence suggests that 97 per cent of Canberra charities have been hit hard by the crises of recent months, and 83 per cent of charities say that they will be significantly impacted. In response, Hands Across Canberra launched the Canberra Recovery Appeal to help local charities get the funds they need to keep operating.

Tiny will be doing his part, and he’s set an ambitious target, too: “Over a three-week period in August, our goal is to raise one million dollars for Canberra charities,” Tiny told Region Media.

To put that in perspective, over the past 10 years, with the help of the Green Shed’s business partners, more than a million dollars has been donated to Canberra charities.

To chronicle the fundraising, a documentary is also being made by people donating their time, and an advertisement promoting the million-dollar fundraiser featuring Akmal Saleh living in the boot of a car is worthy of an award of some kind, Tiny says.

“It’s a very simple system. Any charity in Canberra can apply and we’re aiming to get 100 charities on board,” Tiny explains.

“Say we have an average of 10 people who fundraise per charity. The top 20 fundraisers will get to go to the Canberra Outlet Centre where they physically put their hand on a brand new car that we’ve had donated by VW Lennock.

“The last person standing wins the car. It’s a very simple idea that came from when I was watching Blacklist.”

The premise is the same as promotional events run by car dealerships where entrants touch a vehicle for as long as possible.

Tiny says this idea will harness the spirit of the Canberra community and its ability to look after those in need.

“First, we’re pushing for charities to apply and then we’re going to push the charities to people to start their fundraisers,” he said.

“Anybody can fundraise and if you want to nominate somebody else to put their hand on the car, that’s fine, too.” The Green Shed cake featuring Charlie, Sandie, Elaine and Tiny celebrating Green Shed charity and the passing of the baton from Tiny and Elaine to Sandie and Charlie. Photo: Green Shed Facebook.

A website with all the details of the fundraiser (and a few other ideas in the making) will be launched this week.

Tiny says the premise for supporting charities is also a simple one: “If you can, you should,” he says.

“All the funds go to the charities – nothing comes back to us.

“The bigger goal is to hold regular events and raise $2.5 million for Canberra charities.”

Tiny says the fundraising model is something that can be replicated anywhere.

“Gone are the days of the lamington drive. We can’t even sell chocolates at schools anymore because of health reasons.

“Unless people like me come up with some wacko ideas and are prepared to back it, or have a very cool wife, then people just don’t go through with it.

“That’s what I’m trying to encourage because the charities need our help and hundreds of thousands of Canberrans, in one way or another, have used charities over the last 10 years.

“Lifeline has had record numbers of calls. OzHarvest has been making sure food doesn’t go to waste. We don’t care how we raise money for charities, so long as it’s legal and moral.”

One thing for sure – Tiny is thinking big. Stay tuned for the purchase of a house that will be renovated and the profits donated to charity. 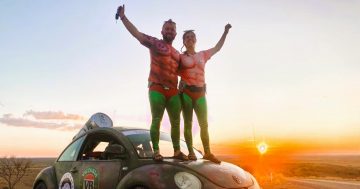