Kids and pets are welcome to help out with the harvest at Lake George Winery this weekend. Photo: Supplied.

Canberra Wine Week kicks off tomorrow and it would be rude not to mark the occasion with a toast to all things viticultural, particularly with our local winegrowing region celebrating its 50th birthday this year. Here are three drinks-focused diary entries to consider this weekend and next.

And if you’re not a wine lover, there’s no need for sour grapes. We’ve thrown in a bonus item for beer and cider aficionados. Street art and local wines will be among the treasures uncovered during the Funky City Walking Tour.

Sips in the city

The experience kicks off at Bailey’s Corner, at the junction of London Circuit and Northbourne Avenue, at 2:00 pm tomorrow (20 March) with an easy 90-minute walking tour that delves into the backstories that colour the city centre.

“We’ll be covering communism in the capital, superheroes and Syrian sweethearts, even a bit of street art,” says Marg, who assures me participants won’t break a sweat during the tour, which covers a maximum of 1 km. 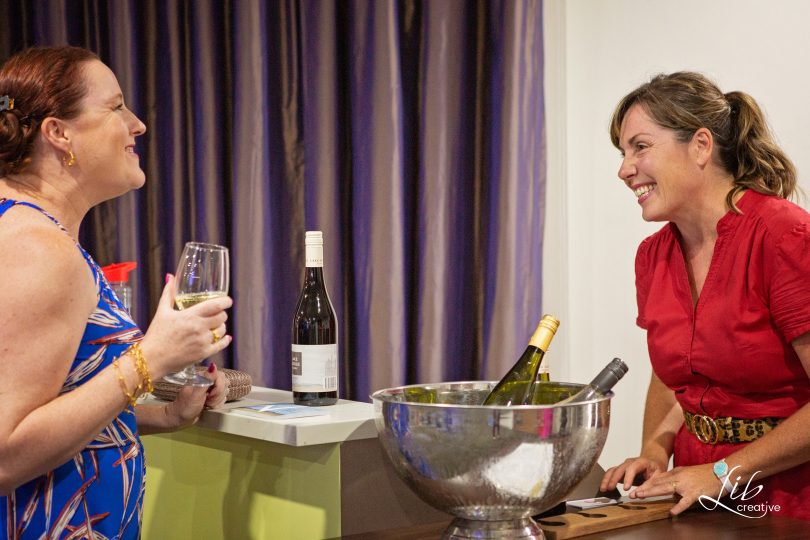 After discovering Canberra’s hidden secrets, the tour will end at a secret location where Jeanene will lead a tasting of four Canberra wines (including a glass of sparkling on arrival for those who’ve worked up a thirst).

“A lot of locals think they don’t need to go on a tour to find out what’s in their own back yard, but it’s incredible how much remains hidden even to people who think they know a place.”

Tickets for The Funky City Walking Tour are $75 per person, including the wine tasting and a cheese platter. A bit on the Sideways

While I’m still to wrap my head around combining exercise with oenological pursuits, pairing wine and film is something that should be positively encouraged. And if the film is the comedy-drama road trip flick Sideways, all the better.

Actor Paul Giamatti’s depressed teacher and unsuccessful writer Miles Raymond would have little trouble picking his favourites from a tasting of six pinot noirs and merlots at Norton Road Wines next weekend. The character’s overt disdain for merlot saw the film singlehandedly dent the sales of merlot-based wines across the world following its 2004 release.

Miles’s passion for pinot noir, on the other hand, saw him frequently wax lyrical on its merits: “Oh, its flavours, they’re just the most haunting and brilliant and thrilling and subtle and … ancient on the planet” was one of his more enthusiastic moments. Norton Road Wines owners Karen and Simon Stratton, who specialise in small-batch, cool-climate wines at their Wamboin vineyard just outside Bungendore, are clearly not afraid to confront the big issues. They’ll be matching a five-course dinner with both pinot noir and merlot for their ‘A Sideways Look at Merlot and Pinot’ dinner on 27 March, and are no doubt prepared for some robust debate.

In case any encouragement is needed to get opinions flowing, Sideways will be screened while guests tuck in. Is pinot your passion? Are you convinced that merlot is unfairly maligned? Are you simply after a great night of food, film and fun, and to hell with all the squabbling? It sounds like a corker of an evening, whatever your position.

Tickets to the dinner and wine matching are $79 per person.

Be the full bottle on winemaking If you’ve always wanted to make your own wine but don’t have the stomach for the hard yakka involved in running a vineyard, get yourself to Lake George Winery this Sunday or next.

Harvest Morning at Lake George is an opportunity for wine novices to get in amongst the vines, pick some grapes and learn about what goes on behind the scenes from the winemaker’s perspective before settling in for a wine-tasting session. And once the picked grapes have been turned, like magic, into wine, the volunteers will be invited back to Lake George to pick up a bottle of the wine they ‘harvested’. Become a winemaker for a day by helping with the harvest at Lake George Winery. Photo: Supplied.

“People love it because it’s the ultimate in bragging rights – they can say, ‘I handpicked the fruit that went into this wine’,” says Lake George Winery vigneron and co-owner Sarah McDougall. “We’ll be picking riesling grapes this Sunday and pinot noir next Sunday, and visitors will have the chance to talk to our winemakers Carla and Malcolm about a wine that’s in mid-ferment. They’ll also get to taste the difference between wine and table grapes, both of which we grow here.”

A brunch of cheese and charcuterie, as well as figs and apples picked from the orchard that morning, will be served in the winery’s Westering Restaurant after the harvest. “Just come with a sense of adventure and a pair of gumboots or some sort of sturdy footwear,” Sarah says. “Kids and dogs are welcome too.” Up to 250 craft beers and ciders will be available to try at this weekend’s Canberra Craft Beer and Cider Festival. Photo: Supplied.

Up to 250 craft beers and ciders, food-matching sessions and meet-the-brewer opportunities should keep those who prefer grain to grape happy this weekend. The Canberra Craft Beer & Cider Festival, in its 14th year (after missing 2020 due to COVID-19), has been expanded to include 40 local and interstate exhibitors, live entertainment and a range of dining options.

The festival will be held at the Mercure Canberra tomorrow, with the adjoining lawns of Batman and Gooreen streets in Braddon also housing exhibitors. Not a wine lover? There are plenty of beers and ciders available this weekend during the Canberra Craft Beer & Cider Festival. Photo: Supplied.

Two sessions will be held to keep things COVID-safe – the first from 11:00 am to 2:00 pm and the second from 3:00 pm to 6:00 pm. All transactions will be cashless, with a tap-and-go system in place for purchases.

Tickets to the Canberra Craft Beer & Cider Festival are $20 per person for advance purchase or $30 on the day, with proceeds going to Rise Above Capital Region Cancer Relief. 150 ml tastings are $4 each.