He got the taste for distilling as a young bartender, and for the past five years, Ben Osborne has been working towards his dream of starting his own distillery in Canberra.

That dream has been realised.

The founder of Canberra’s Local Spirit Group, Ben started “gypsy distilling” at other distilleries after hours when he concluded he had no chance of obtaining a loan to get going under his own steam.

But the 25-year-old businessman’s hard work and determination have paid off, with his new still now up and running in Beard.

“Batch by batch, each product I gypsy distilled sold out, which meant I could purchase a new bit of equipment, a bigger warehouse space and finally a custom-built 300-litre copper still,” he said.

A clever array of pipes allows Ben’s “everything still” to go from a classic copper pot still for making single malt to a 10-plate column vodka still that towers over 4.5 metres tall to create the premium vodka with the flick of a lever.

“Another flick of a lever and the spirit path is directed through our copper vapour basket to enhance our gin’s flavour and aroma even more,” Ben added.

Ben has named his first gin The Super Dry, a triple organic juniper gin which is a nod to the classic London dry, but with a little bit extra.

“I use a triple infusion process and organic botanicals to enhance the flavour of the classic gin method,” he said.

His unique process, which includes heating the botanicals and leaving them to steep at 40 degrees for 24 hours, creates the “ginniest gin you’ll ever taste”.

“Opening that still is a sucker punch to the nose of delicious juniper, like getting hit in the face with a pinecone … but nice,” he said. As well as gin, Ben also makes a selection of vodkas, ferments wine and will soon be brewing a range of Local Spirit beer.

He spent eight months developing a proprietary centrifugal jet pump with a high-pressure filtration system for his unique style of cold-brew coffee used in his boutique coffee liqueurs.

“I spent six months sourcing the green beans and roasting the perfect coffee for the perfect cold brew concentrate that has up to 80 per cent less bitterness than a hot-extracted coffee,” Ben explained.

“This is the base for our coffee liqueurs, bottled espresso martini and our one-of-a-kind Single Malt Coffee Liqueur – a whisky and coffee drinker’s ultimate drink.”

His passion began when working in the bars of Canberra when he was 18. He took part in masterclasses and tastings and had an opportunity to meet wine and spirit makers while conducting winery tours around the Canberra region.

“Seeing the passion and love they have put into their products sparked my interest in further understanding how things are made,” Ben said.

With his dream distillery up and running, he has been joined by chief operations controller Josh Newbery, the ultimate handyman and a fellow fine beverages enthusiast. He is currently helping develop local beers.

Canberra-based artist Dan Power painted the label design based on the original design of the still and a long list of botanicals used in the products. 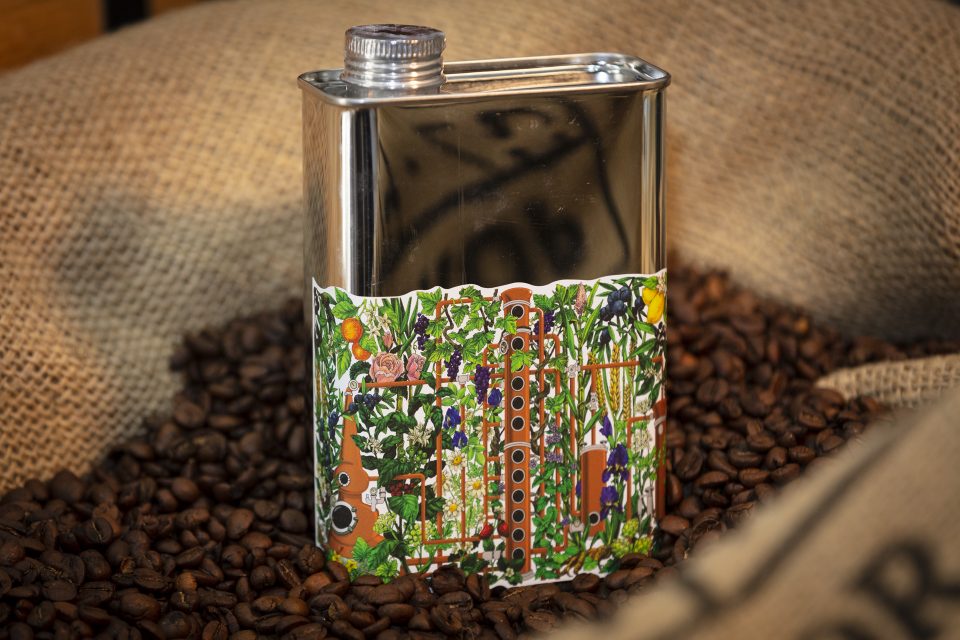 Artist Dan Power and Ben with the label artwork. To celebrate the completion of the Local Spirit Distillery, Ben has launched three limited edition gins which he says are perfect for the festive season.

The PUD Spiced Gin, which has been rum barrel-aged for the raisin and fruity flavours, looks like a snow globe and tastes like Christmas pudding.

“I’ve used organic Cassia bark for the spice with a touch of brown sugar to elevate and bring all of the flavours together like a good pud should,” Ben said.

He plans to continue “playing with flavours” and making limited release gins inspired by the seasons and local produce.

“As the owner of the Australian Gin Appreciation Society, with more than 14,000 gin-loving members, it’s been wonderful to get ideas from the group and talk about all things botanical with other gin fanatics,” Ben added.

“With these three limited releases, I want people to experience what citrus, spiced and floral gin is like and to figure out what style of gin they’re really enjoying.”

Check out the range of Local Spirit Distillery products. A limited selection is available at Farrah’s Liquor Collective and Ben hopes to have a cocktail tasting event in the New Year.