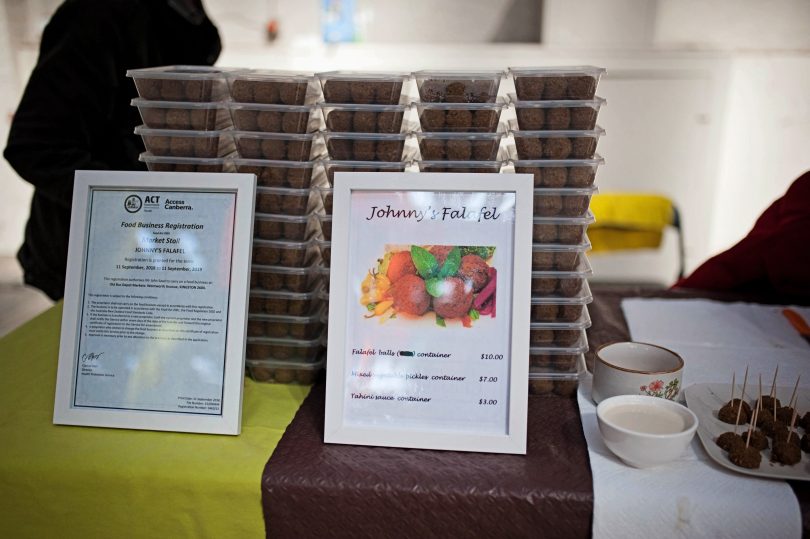 “I’ll give you a tip. When you soak the chickpeas, ok, you get just a teaspoon of bicarbonate of soda and stir it in well. Don’t put in hot water, put in cold water. If you put them in hot water, they go black.”

It’s not every day you get a personal hummus tutorial from someone who established Lebanese food in Australia. What a privilege! I take notes.

Johnny is a big personality; he has lived a big life. That is obvious, even from the brief conversation we had when I stopped to sample falafel at his stall, Johnny’s Falafel, in the Old Bus Depot Markets.

Now I sit in his living room, sipping my second cup of sweet Lebanese coffee as Johnny tells me his story.

Born in France, Johnny was just four when the family moved to Lebanon, his father’s homeland.

His father established a restaurant and Johnny quit school to help.

When he turned 18, Johnny left all he knew behind, seeking a secure future and a food dream of his own in Sydney.

He wanted to bring the variety and international appeal of Lebanese food to his new homeland. He began cooking the food he knew best and Sydney-siders fell in love with the aromatic Lebanese flavours that have become so familiar to us all. Johnny pioneered a technique of keeping food fresh that so many cafes and restaurants use today. Instead of using a traditional bain-marie style of keeping food warm on heat, Johnny displayed his food in chilled containers.

His first three restaurants, Le Plat Magique, Beirut Cookhouse and Cedar Branch produced delicious dishes and drew in customers, raking in a tidy profit. Johnny built a real estate portfolio and brought his entire family over to Australia from Lebanon.

He seized the opportunity to open a fourth restaurant In ‘n’ Out Falafel, in a new development known as Darling Harbour.

A multi-millionaire walked into In ‘n’ Out Falafel and tasted a shawarma. Johnny says. “He said to me, ‘You are unbelievable! This meat is so beautiful, so tasty. Here is my card. I am only here for a short time. Come with me and let’s do an In ‘n’ Out Falafel franchise in America.’”

Astronomical rent charges for the exclusive Darling Harbour location quickly chewed through Johnny’s bank balance and he still needed to pay his staff. Darling Harbour’s promised casino, bringing in hungry crowds, didn’t materialise; however, two large fast-food chains did. Immediately opposite his restaurant. The busy crowds favoured the quick-eat options over Johnny’s slower cuisine. He went broke and lost everything.

With his restaurant dreams in tatters and losing his investment properties to cover his debts, Johnny tells me, “I retired and came to be with my family here in Canberra six years ago”.

During a visit to his niece at her burger joint, Brodburger, he discovered the Old Bus Depot Markets, and this marked the gentle beginnings of a new food enterprise, Johnny’s Falafel. A tasting tray of Johnny’s falafel.

Johnny specialises in a selection of Lebanese dishes. His business, Johnny’s Falafel serves up falafel, stuffed vine leaves and tahini at both the Old Bus Depot Markets and the South Farmer’s Markets. Fried cauliflower and pickles are available seasonally.

He cooks everything in his own kitchen, pickling the vine leaves himself and stuffing them with salad and rice. The stuffed vine leaves are succulent mouthfuls, popping with flavour.

Falafel is originally an Israeli dish, but like all his food, Johnny makes his falafel the Lebanese way, incorporating broad beans and chickpeas. In order for the falafel to last up to three weeks in the refrigerator, Johnny substitutes dry herbs for fresh. Dry is his secret to the falafel’s shelf life. His falafel is freezer friendly. All his products are vegan-friendly, gluten-free and nut-free.

Warmed up, the falafel’s garlic and spice components do not overwhelm the delicate chickpea taste.

Johnny’s tahini is creamy with a tangy balance of sesame paste, garlic and lemon.

It’s simple, delicious food from the fascinating man who helped pioneer these flavours in Australia.

Farewell Fekerte and thank you for 25 years of fantastic food