Adding to the sophisticated, fresh facelift the Sydney Building in Civic received last year with the opening of Verity Lane Market and East Row Speciality Coffee, a new cosmopolitan wine and aperitif bar has joined their ranks.

Heavily inspired by small ‘hole-in-the-wall’ bars of Barcelona, Dear Prudence will serve a range of vermouths, aperitifs, wine and cocktails, as well as a short menu of Spanish influenced snacks, with a twist. The interior design of Dear Prudence takes the building back to basics.

“Our take on this concept will offer vermouth and aperitifs unavailable anywhere else in Canberra and set to sharpen the palates of locals,” says Master Sommelier Chester Mok who is curating the beverage list for the bar.

“The wine list has a strong European influence while accentuating the fun of wine by the glass and the cocktail list is fun, light, and colourful.”

Complementing the unique beverages is a small rotating menu of Spanish-inspired snacks. Diners can fill their table with Losada pepper and Stracciatella and smoked pimentón with a side of Smith’s chips and larger plates like Cuca Navajas and XO Adelaide Hills Triple cream Brie, fig, crackers and pickles and Deda Smokehouse sopressa with pickles.

The tapas-style menu was curated by Gerald Ong, who has just wrapped up his extremely popular Verity Lane Market pop-up, Project Enoki. The menu reflects his refined yet light-hearted playful style. Complimentary to the unique beverages is a small rotating menu of Spanish-inspired snacks.

Inside, the interior design takes the building back to basics. River stones from the Molonglo River are visible in the ceiling concrete. The arches of the half-moon windows look out to Plane trees, with distressed walls, European-styled furniture, and lighting completing the pared-back urbane picture.

As for the name, ‘Dear Prudence’ is derived from the popular Beatles song released in 1968.

“It’s possibly the sunniest song written by John Lennon,” says owner Phillip Keir, known for his love of music and his background as the previous Australian publisher of Rolling Stone magazine.

“The lyrics evoke pure fun – won’t you come out to play? It is exactly the feeling Prudence will conjure for locals. A fun place to visit after work and before dinner or after dinner for a couple of nightcaps,” says Mr Keir. Dear Prudence is located at 102 Alinga Street, Canberra City, and is open from Tuesday to Sunday from 4:00 pm until late. 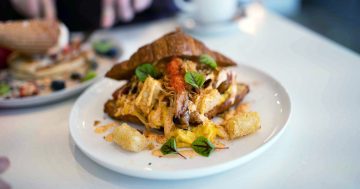 Hot in the City: Taste the Thai tweaks to Mayfair Espresso's all day menu! Hot in the City: Step into my Parlour for versatile, innovative and delicious dining