In the 1950s, the road to Belconnen was a gravel track from Dryandra Street, O’Connor that headed into the bush.

One of the first roads of the district, the Old Weetangerra Road (with the double ‘r’) connected early European settlements in the area from the 1830s. It can be traced today on the ‘Old Weetangera Road Trail’, part of the Bicentennial National Trail that snakes its way through Belconnen from O’Connor, over Bruce Ridge, near Aranda oval and Canberra High School before heading westward to Holt.

Long before Europeans settled in this area, local Ngunnawal people trod these same tracks for thousands of years, reading the landscape and managing the land.

In the 1960s, Canberra was undergoing rapid growth. Public service transfers were taking place from Melbourne, migrants were attracted to the capital and families were having children. It was said that in 1961, there were more trees and children per capita in Canberra than any other Australian city. From 20,000 residents in 1950 to 60,000 residents in 1960, Canberra was on the move and the new suburbs of Belconnen were eagerly sought.

A marker is located near Aranda Oval denoting the start of Belconnen Town Centre on 23 June 1966. The name Belconnen is believed to be of Aboriginal origin, and comes from a land grant that was made to the explorer Captain Charles Sturt in 1837. By November 1967, the streets in Aranda, Belconnen’s first suburb, were laid out, infrastructure was in place and innovative sloped kerbs were being installed. This thoughtful design meant that driveways would not need to be installed at a later date, the sloped kerbs would easily accommodate these. Work had also started on the suburbs of Macquarie and Cook.

In 1967, Minister for the Interior Peter Nixon drove along the first one and a half miles of the new Belconnen Way (which aligned with the Old Weetangerra Road) and in a special ceremony, handed the keys over to the proud new residents of the first government house in Aranda. Belconnen began to develop rapidly with the suburbs of Bruce, Cook, Higgins, Latham, Page, Scullin, Weetangera and Belconnen gazetted in 1968.

The Brutalist-style Cameron offices designed by one of Australia’s leading architects of the modern movement, John Andrews, was a feature of Belconnen from the 1970s. Designed to link with Belconnen Mall as well as other urban aspects of transport and housing, the concept didn’t quite work when the plan for Belconnen Mall was changed, moving the easy access to shopping further away.

The concept of Cameron Offices’ unobstructed views, rooftop and courtyard gardens of natural Australian landscapes was well conceived, but in reality, the building leaked and had many problems. There was also the urban myth about one of the wings anchoring the entire building. It was thought that if this was removed the entire nine wings of the building would collapse. This was disproven when wings 5–9 were demolished in later years. 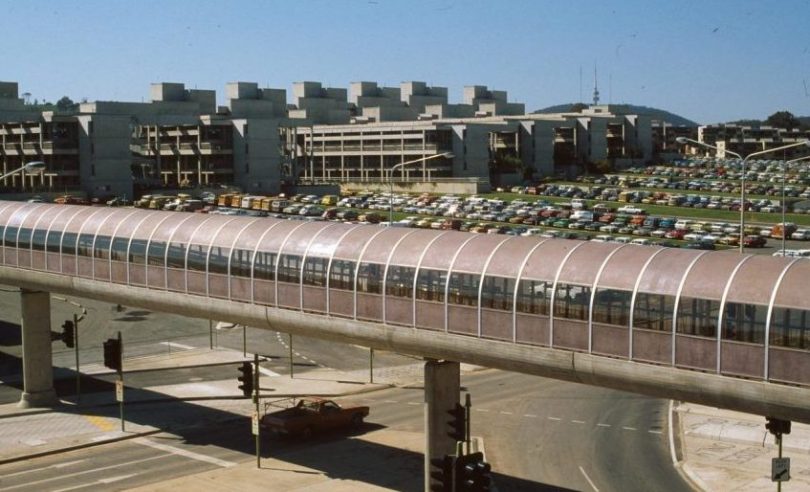 So important were Cameron Offices considered to be, that Austrian-born Bert Flugelman (known for his stainless-steel work Cones outside the National Gallery), was commissioned to create a large work for the garden. Tumbling cubes (Dice) was placed here, but subsequently moved to Margaret Timpson Park adjacent Belconnen Mall, much to the ire of the artist, who said it was a ‘hopelessly inappropriate site’. Close to Belconnen Mall is Emu Bank, now the site of townhouse complexes. Referring to early European settlement, the name originates from Emu Bank Homestead and the back paddock that was called Emu Bank, because of the plentiful number of emus there. It seems the emus were easy game on the treeless plain and were said ‘to be tastier than marsupials’. An English elm today stands outside Belconnen Library, marking the place where Emu Bank Homestead once stood.

For the record, the first set of traffic lights in Belconnen appeared in 1973 on the corner of Belconnen Way and Caswell Drive. How many would be along Belconnen Way now?

Finally, a story about Belconnen just would not fly without a mention of the Belconnen owl. Artist Bruce Armstrong created this 2011 landmark sculpture in honour of the powerful owl which visits the ACT. He was also quite bemused by the public’s response to his work. Who would have thought this would be a powerful phallic symbol?