From kitchen scraps to community compost, this recycling project's heating up The Urban Compost Hub at Hackett has processed 3 tonnes of kitchen scraps in around 12 months. Photo: Supplied.

Piles of white plastic yogurt containers, an electric tricycle and a giant thermometer are coming together to make magic. Microbial magic that is – or compost!

This compost is being made in large-scale composters around the inner north by Capital Scraps Composting, a small community enterprise run by Brook Clinton from her suburban backyard.

Capital Scraps collects vegetable scraps from local households once a week. Brook loads the full yogurt containers into her electric tricycle and leaves a freshly washed container behind for next week. “The electric bike is charged from our solar panels, so it is carbon neutral travel,” she explains. “We have used a car, but it can’t get down the laneways or through the apartment block pathways, so it is no quicker.” This electric bike is used to collect tubs of kitchen scraps and bags of autumn leaves. Photo: Supplied.

The people who sign up to have their kitchen scraps collected are a mixed bunch.

“There are older people, people who are too busy for composting, they might have just had a baby, people who live in apartments or with small yards who don’t have space, and even people whose compost bin is already full,” she says.

Backyard composters may find their own heaps take months or even years to turn into garden-ready compost. But at Capital Scraps they have it down to a fine art.

“We can get it to a compost state in four weeks,” Clinton explains.

But it doesn’t happen on its own – there is a well-tuned process of turning the heaps, adding the right amount of shredded leaves and even taking the temperature of the compost heap, which can get close to 80 degrees.

Brook Clinton first became interested in compost from a scientific angle, perhaps because she has a PhD in Biochemistry and Microbiology. “I wanted to bring the science to composting and do it really well,” she says. The business started out several years ago as the Hackett Compost Collective, with just Brook, some donated yogurt buckets and a backyard compost heap made from scavenged wood.

“It doesn’t look pretty, but all the action happens in there, so it works,” she says.

In the early days her tricycle was pedal-powered, but homes on steep streets and the growing number of scrap buckets made the electric motor essential. The trike has collected “literally tonnes of kitchen scraps,” says Clinton.

The compost collection has grown to encompass the surrounding suburbs, and the plan is to keep slowly growing to reach as many households as possible. But you can’t pop along and put your scraps inside, this is composting on a professional level, and Brook herself adds the right mix of leaves, scraps and hot compost to get the new compost going.

The fees from those who sign up for weekly scrap collection all go towards building new composters, and Brook has a range of volunteers who wash the compost buckets, shred leaves or sift the finished compost. Capital Scraps also has an employee working one day a week to collect the compost buckets. “It is important to create green jobs in the economy,” Clinton says. 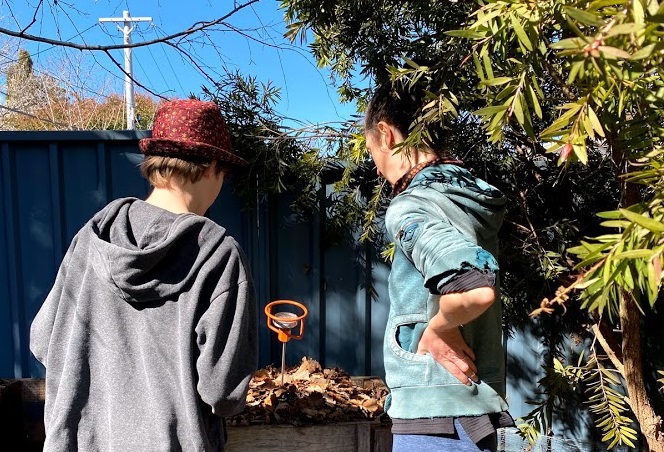 Brook Clinton and a volunteer measure the temperature of the compost. Photo: Cass Proudfoot.

The finished compost goes back to those who donate scraps or is allocated to community gardens in the area.

“Moving the compost is a challenge,” Clinton explains. “It is heavy and bulky.”

The finished product is transported in donated 20-litre tubs, inside a hired van from Go Get, a local car-sharing enterprise.

“We are actually crowdfunding for an electric van,” says Clinton. This would allow Capital Scraps to range farther afield, joining up members from outside the inner north, and transporting partly composted material to get new urban compost hubs started. A large thermometer is used to test the heat of the compost. Photo: Cass Proudfoot.

Just this weekend a new composter was launched at the Lyneham Commons community garden, and there are already plans for more. “It’s all systems go at Capital Scraps!” says Brook Clinton.