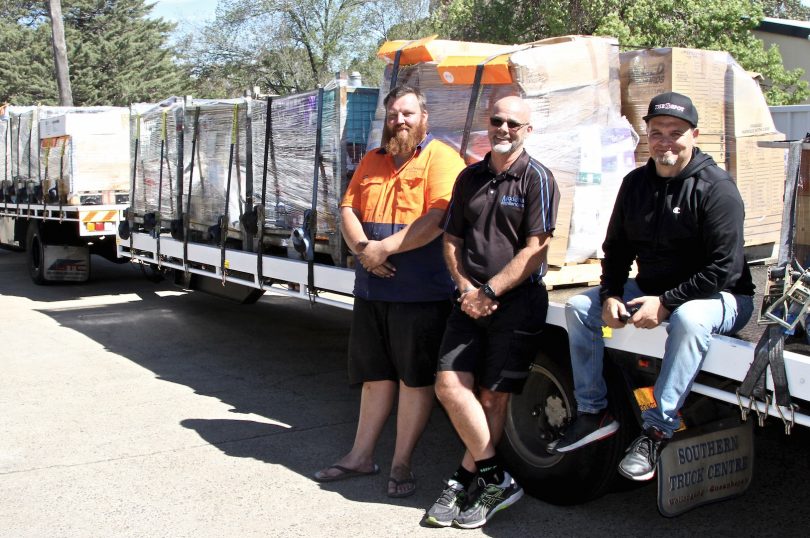 Mick O’Regan, Andrew Toy and Andrew Dale with the truck full of items donated by Canberrans that left for bushfire-affected towns on the NSW mid-north coast on Monday. Photo: Michael Weaver.

For people affected by bushfires on the NSW mid-north coast, Christmas is literally about to come on the back of a truck.

Five Christmas trees are just part of the load travelling to the Taree and Nambucca Heads areas on a truck that left Canberra yesterday (18 November).

“These Christmas trees will replace the ones that won’t be there at Christmas,” said Andrew Dale from The G-Spot at Gungahlin.

“It’s all just part of the amazing things that people have donated over the last few days.”

Andrew has been one cog in the wheel that has seen Canberra residents turn up in droves to donate what they could.

When Region Media reported the magnitude of the donations last week, the story hinted that they were going to need a bigger truck.

One was already forthcoming, with Tony Day from Tony Innaimo Transport getting on board.

Mick O’Regan from Mick’s Transport Service left on Monday with his truck laden with 18 pallets, or 18 cubic metres of freight.

It was all stored, wrapped and loaded with the help of generous Canberrans and Andrew Toy from Modena Appliances.

There are more than 15,000 bottles of water, along with non-perishable items, pet food and toiletries, and around 100 picnic blankets.

There’s even a kitchen sink … of sorts.

“Someone gave us a bathtub that will go to people who need it more than we do,” said Andrew Dale. The storage shed of items at Modena Appliances that will help people affected by the bushfires in NSW. Photo: Supplied

Andrew has been in almost constant contact with State Emergency Service personnel on the ground, updating them on the delivery.

Word is “they can’t wait” to receive the items that will go to people who don’t know where their next meal is coming from. Items will also go to the weary firefighters who have been working for days on end.

Andrew Toy from Modena Appliances said, “There are a lot of people worse off than us and it’s definitely not about what we’re doing here, as we’re just doing what we can to help.

“Someone went to the trouble of hand-sewing 20 backpacks filled with different items.

“The thoughtfulness of people is just amazing to see.”

People have also donated cash, with almost $2000 to be handed over and spent at businesses in bushfire-affected towns.

More than 50 bushfires are continuing to burn across the state, with the North Coast, Northern Tablelands and Hunter the worst-affected regions.

“Our main focus is to ensure the survival and welfare of animals and wildlife,” Mr Fifield said.

“Since the Agricultural and Animal Services Hotline opened last Tuesday, 965 calls for assistance have been received.

“A number of Animal Evacuation Centres have housed more than 3800 animals.

“Another two emergency fodder points will be opened tomorrow at DPI’s Wollongbar Institute and Wauchope.

“Already we have distributed 1480 tonnes of fodder to more than 220 landholders.”

If people still wish to donate items, Andrew Dale says they should be sent to Communities at Work at their Gungahlin or Tuggeranong depots.

Posted by The G Spot Canberra on Sunday, 17 November 2019

Canberra connects for bushfire relief, but they may need a bigger truck