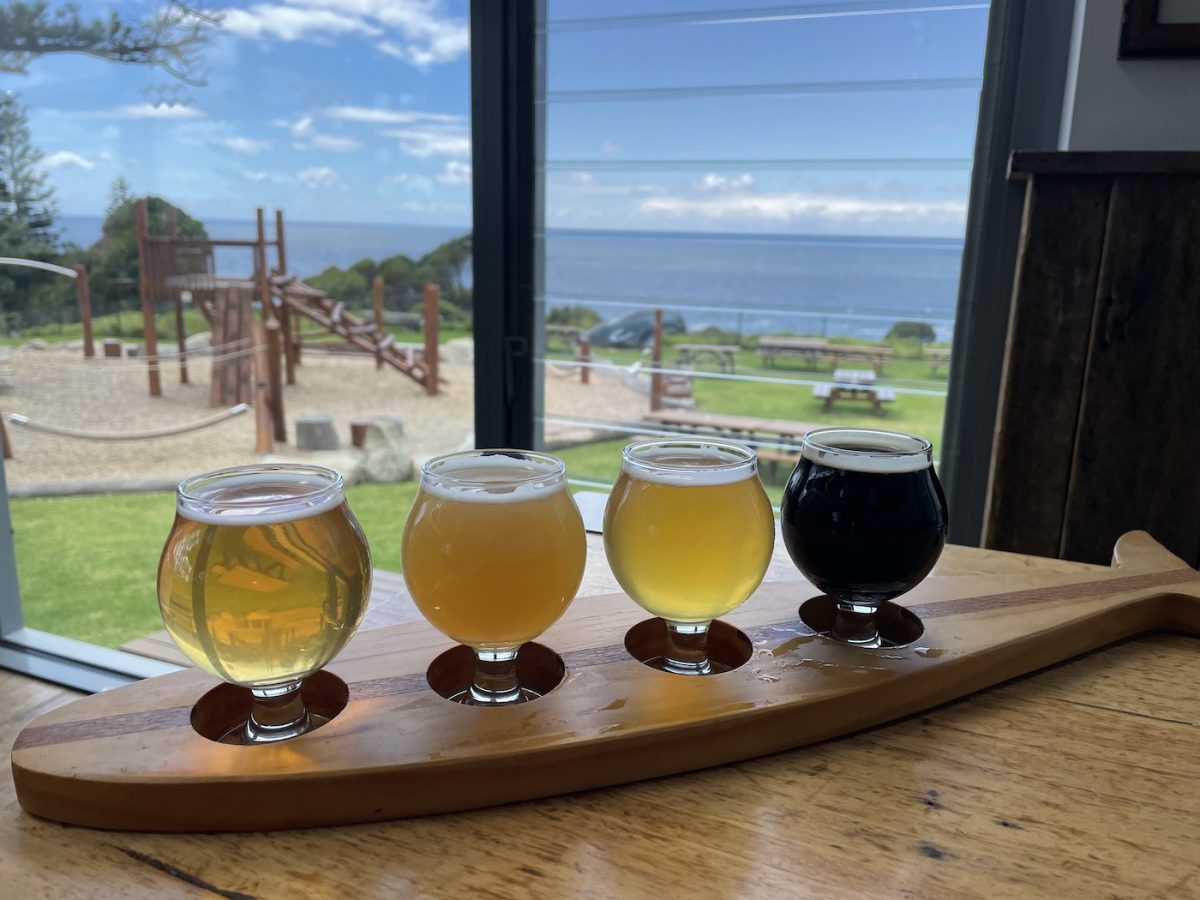 Brews with a view along the Far South Coast including the Humpback Brewery, located in the stunning Tathra Hotel. Photo: Lisa Herbert.

Heading south for the summer? In need of some refreshment along the way? Of course we are. Luckily there is a burgeoning independent beer scene along our salty shores, providing brews, eats, music and general frothy magic.

The whales have departed, but there is still a Far South Coast brewery trail to be followed at a crawl in order to soak up some flavour.

From sours to porters, there are good times to be had with your mates or your family, no matter the weather. We recently took a little sojourn along a route that took in eight of the best breweries on the South Coast from Batemans Bay to Pambula. We indulged in a paddle of ponies in the big buzzy courtyard, with a coffee van in the corner and a tipi for the kids. Our choice was: Hazy (pale), Broulee Blonde, Munich Lager, Tropical Sour … these chosen from a list of 10 that includes cider, XPA, stout and a mid-strength.

Hazy Pale Ale is a delish four-hopped ale, the Blonde is much like a Carlton Draught style, and has just taken over from the Hazy as most popular. The Munich is a new-world German style with hints of passionfruit and the Sour is sour, with pineapple passionfruit and mango.

Brewer Matt Sillet has been brewing for 20 years and working with the Brewhouse for nine months now, so settled in nicely. There’s a great beer-friendly menu of eats such as rosemary salted fries, chicken wings, poppers, calamari, loaded fries, hot dogs, burgers, toasties and fish and chips. After 10 years of sharing the load running popular Blue Earth Cafe on this site, one brother of the two-brother team, Eric, and his wife Kirsty, said let’s turn it into a brewery! And so Malt Man was born.

Using hops they are growing on-site, many of the brews are seasonal, and the offering is ever-changing. On our visit we tried the popular Raspberry Rogue, the signature Malt Man Pale Ale (which is extremely delicious), the Tiny Toro Amber Ale, and second best-seller Pepper’s Porter.

Also on the board the day we visited were a Krankin Kolsch, Booster Brut IPA (Kirsty’s fave), and The Flash Session Ale.

Malt Man is a very friendly small batch brewery, run solely by this dedicated, friendly couple. The lovely, shady garden is relaxing, and dog friendly, and there is a small menu of pizzas and snacks, and some wine available.

Open Thursday to Sunday, midday to 6 pm, or 7 pm in the season.

Big Nile’s is a small brewery serving up big flavours, in a big shed on the coast. Photo: Lisa Herbert.

Just off the highway, among the tall trees of the coastal forest on the road to Dalmeny is a clutch of blue sheds. The front of house is run by Michelle, her husband Cam is the brewer, and Big Nile is their popular and quite large dog.

Big Nile’s big sheds have been here for a very tough three years, with their approval coming through three or four days before the 2019/20 bushfires. Then of course came the COVID-19 lockdowns, but “we’ve made it through.” Michelle also reckons they even gained a few new customers during lockdown as the local clubs were closed and “so they came, the Resch’s drinkers and were converted!”

The Ball and Chain uses loads of raspberries and is totally refreshing, the flavour and body of Beerdy’s Birthday is fabulous, the Boardriders NEPA extremely juicy. There are always 10 or 11 beers on the board, and they purchase hops from two of the local growers that have switched from dairying to hop growing: Ryefield Hops of Bemboka and Ivry Hops of Bodalla.

Open every day from Christmas to new year, then from 5 January, will close Mondays. Check times, but Big Nile’s hope to open for lunch all summer long, with a rotating parade of great local food vans and their own charcoal barbecue. 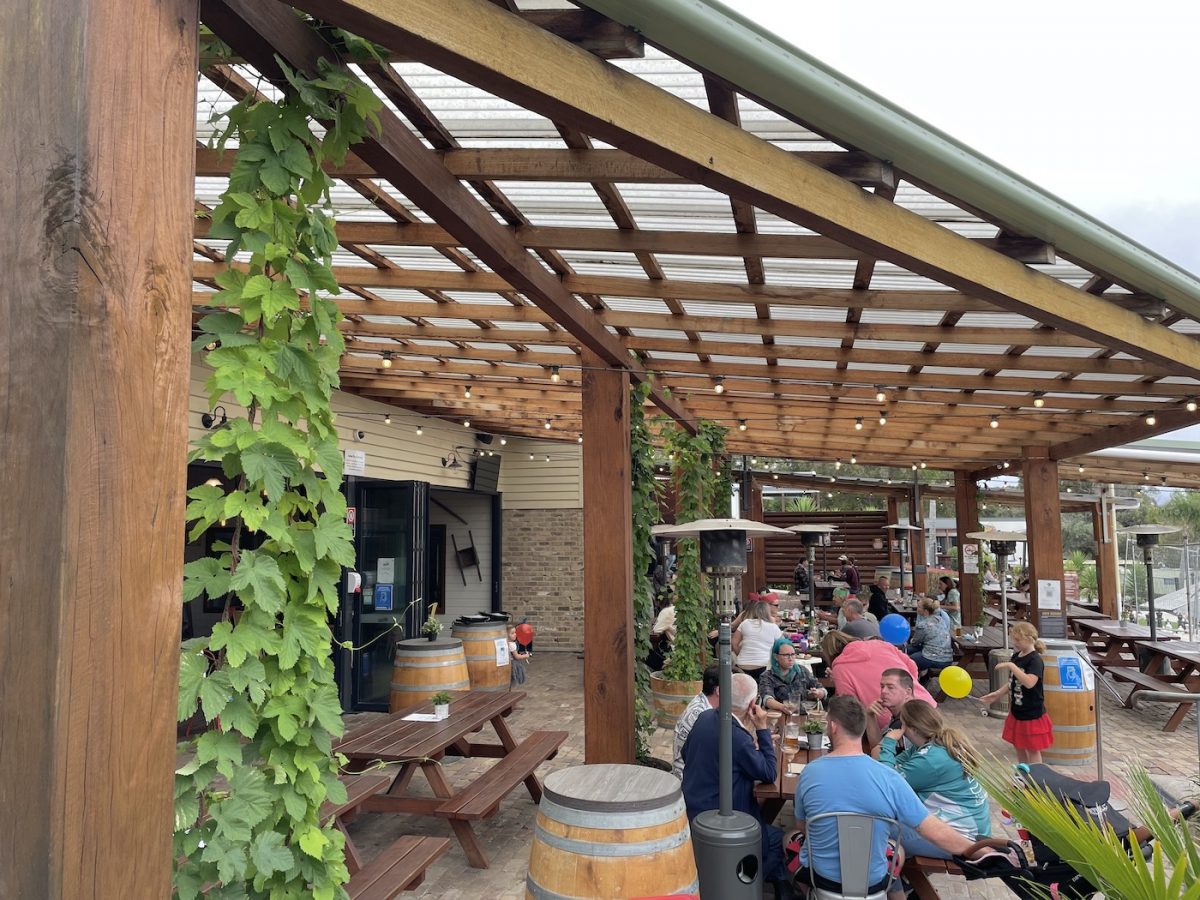 A big buzzy courtyard, plenty on tap and a worthwhile menu, with a music program at Camel Rock Brewery. Photo: Lisa Herbert.

In the warmer months, loads of families and youngsters, holiday makers and locals, taste their way through brews and soft drinks and perfectly matched sticky, crunchy chicken wings, jalapeno poppers and burgers in the courtyard at Camel Rock Brewery.

Elegant hop vines grow up into the pergola, and old timbers and stone add to the warm atmosphere. Regular live music flows alongside the brews, and kids are catered for, with a kids-only zone, plus dogs are welcome.

The American-style menu matches the bevvies well, with loads of spice and stickiness. Camel Rock has a happy hour, and a selection of cocktails, Thursday woodfired pizza and music on Sundays, and Saturday lunchtime.

The Camel Rock Brewery was the first microbrewery in this region, and is surrounded by history. The original building is the historic Allawah House, built on Paynes Island at Wallaga Lake Bridge in 1917. There’s loads to explore here with the nearby Montreal Goldfields a fascinating and worthwhile diversion. The historic Dromedary Hotel in Central Tilba is home to the Tilba Brewing Co. offering their own brews on tap. Photo: Lisa Herbert.

Built as a coffee palace in 1895, the lovely Dromedary Hotel is now serving up beers brewed and canned on the South Coast. Head brewer is Jono Beazley of Stoic Brewing of Gerringong. Collaborating with Andrew Prosser, of Stoic, and Jeremy Corfield, of the Drom, these craft beers for Tilba Brewing Co are well honed, and very well received.

On tap the day we called in was the bestselling Mystery Bay IPA, smooth copper-toned Prospector Amber Ale, the bold Palace Pale Ale (a nod to the original name of The Dromedary Hotel) and the stunning Blueberry Oat Cream Sour. Purple in colour and made with real blueberries, this creamy, fruity sour-drop, 5.1 per cent abv, had us humming through the day.

The Prospector Amber Ale recognises Tilba’s Mount Dromedary Gold Mining Company, which operated in the area from 1878 until 1910. This is just a little of the history you feel all around you in the gorgeous village of Central Tilba. There’s loads to explore and the pub will serve you a great lunch or dinner and has an extensive beer garden. Regular music also, check their socials for info. On the beautiful shores of Corunna Lake, Tilba Valley Winery & Alehouse has a perfect setting for getting together over a beer. Photo: Supplied.

Nestled on the shores of beautiful Corunna Lake, this family-run winery/brewery has been brewing onsite since early 2019. Having moved to Tilba four years ago, brother and sister team Jamie and Carly have been inspired by the property and are clearly loving what they do, Carly telling us, “Sometimes it’s as if I’m not working.”

Varieties of beer including dark ales, lager, sours and a most popular pale, and they also brew ciders using Batlow apples and juice from the apple isle (Tasmania).

These guys are very family and pet friendly, and you can enjoy lunch in the vineyard, on a rug under the gum trees, grazing on a Tilba Cheese Box with matched wine, or choose from a blackboard menu and daily specials that complement the house-made beverages.

Hours are Wednesday to Friday 10 am to 4 pm, Saturday to Sunday 11 am to 5 pm. Lunch is from noon to 2 pm. Live music on Saturday and Sunday is from 12 pm. There’s a big, barn-like dining room where stand-up comedy has been known to happen, so check their Facebook events to see what they have in store for you! High on the headland, 11 beers and a cider on tap, big welcoming deck, the Humpback Brewery awaits. Photo: Lisa Herbert.

Overlooking the big, blue Humpback Highway this brewery in a pub makes sure the beer flows freely all summer.

When current owners took over the pub they ditched the old pokie room and installed the brewery which is now solar-run. Grab a paddle to whet your whistle and help with future decisions as we did, from the delicious Ginger (Wh)ale, through the uplifting and summery Ms Davidson’s Lime Hibiscus Sour, or perhaps a chocolatey Black Whale Stout.

You could go for the hoppy ‘Life’s a Breach’ Extra Pale Lager or some classic beery beers like pilsener, there’s also fine pale ales, a mid and amber, draught and mild, and of course the famous Dr Nott’s Porter is a staple. There are 11 beers on tap plus the one cider.

A good pub lunch is served here every day, with regular weekend music, a big wide deck surrounded by ocean and a not-your-average kids playground. Brews are available in cans here and around the region, and use hops from various local growers.

Hops will be explored in-depth at their Terroir series later in summer, when the brewers will make two batches using the same recipe, and the same species, but different growers for the hops: Ryefield in Bemboka, and Ivry in Bodalla … so we shall see what effect the region’s soil may have. Just off the highway and hidden away behind the browsable stores and galleries of the Oaklands complex in Pambula is a rocking little joint with regular music, great woodfired pizzas, local oysters, and fresh brews: eight beers, three dark brews, two ciders and a ginger beer.

There’s an extremely relaxed and happy vibe about this place, with a regular crowd of revellers for the weekends’ live music and weekly music trivia. The decor is very green jungle and oozes merriment, so grab yourself a paddle, jump in and orient your taste buds.

Between these frothies, with a stream of local oysters and woodfired delights, you could while away some Sapphire Coast hours here for sure. All Longstocking brews are canned and available around the South Coast.

Check operating hours for each establishment on their socials.

Off-grid Bega Valley brewery Frogs Hollow Brewing Co. are releasing their first pale ale Out of Towner this season, soon to be available through local stockists.