One year on and residents throughout NSW and the ACT are still coming to terms with the emotional effects of the Black Summer bushfires. To help children process the trauma and emotions of the unforgettable events, Tilba resident and author Jody Vassallo has written The Brave-Bottomed Wombat.

The book is illustrated by Cara King and involves a wombat, some cheeky humour and an act of kindness.

Ms Vassallo is a Rural Fire Service volunteer and experienced first hand the impact the fires had on children.

“Kids would always ask me about the animals,” she said, “but the only animals I’d seen were so badly affected by the fires, I didn’t know how to answer positively.

“To process things you need to talk to people. It felt so good that the community could see each other, but the moment we were locked down things became more fragile, and I needed some way to process what had happened without telling my own personal story. The way I process my emotions is through writing.”

The Brave-Bottomed Wombat is the first children’s book she has authored, and it’s helping both children and adults who experienced the firestorm last summer.

“It’s really helped adults think about this in a gentler way,” she said.

“Thinking about the reality of it is just a bit too confronting, but the way I’ve approached it, it also looks at the really beautiful things that came out of it – community and humour, and that nature leads the way for us to recover.”

The book offers a safe way for children to access the feelings and memories they have about the fires, and then talk about them.

Inspired by the stories of animals sheltering in wombat burrows during the bushfires, the book is about a mother wombat saving her baby and a host of other animals by sharing her burrow.

“So many of my friends told me that their kids couldn’t sleep because they were traumatised by the fires. If this book could make a difference, if it could change the way they feel about the fires and give them a happier message, I knew I had to do it,” Vassallo said. The book is illustrated with watercolours by Cara King. Image: Supplied.

The book has the added purpose of raising funds for Firesticks, an organisation that practices cultural burning using Indigenous land management techniques to act as a defence against future bushfires.

Ms Vassallo also authored Farmer: Recipes and Stories from the Land which raised $300,000 for farmers in the drought, with the funds distributed through the Country Women’s Association.

“I think of Wombat as a story of hope. It’s a story of community and animals. But that’s what we did here; we did what the wombat did. We came together and it’s the community that has gotten us through. We’re rebuilding together.”

The Brave-Bottomed Wombat can be pre-ordered online, with the proceeds funding the book’s publication and the remainder to be donated to Firesticks. 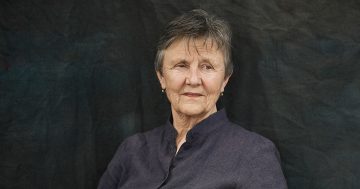