Binalong shopkeeper's childhood memories have brought her back to the bush A rail motor on the spur line between Cootamundra and Tumut. Photo: Tumut History (Kevin Swann).

Binalong shop keeper Cathy Kerslake’s passion for rural villages and country life started with a childhood train journey to Tumut, the last leg aboard an old red rattler up a spur line.

As a little girl from Sydney, she recalls looking in wonder from the train’s varnished, timber-framed window that actually opened.

A longing for the bush was born that day, nurtured by holidays with family in a red-roofed farmhouse, and turned into an itch that finally subsided many years later when she bought the Old Produce Store at Binalong.

Cathy’s business in the tiny village 95 kilometres north-west of Canberra sells foods and giftware made in the country. She is keen to help where she can after a terrible summer, and hopes to return to visit the Tumut-Batlow district to support food producers recovering from the bushfires.

The Old Produce Store is stocked with honey, beeswax and packets of her own brand of blended Australian and Chinese tea. Infused with gum leaves, the billy tea is her bestseller, followed by honey products from Mudgee and Hilltops and ceramics made in Wagga Wagga.

In the village she is uncovering points of interest, including and beyond the bushranger and Banjo Paterson stories synonymous with Binalong. Extraordinary yet real events shaped the poems and legends which lure travellers off the highway into the village.

“Galong is only a spit away from Binalong, it’s like a little ghost town, it has beautiful buildings. When I saw Galong I thought, we don’t want that emptiness to happen to Binalong, that’s one of the reasons I developed the Binalong Bushrangers brand of tea,” Cathy says.

“We want awareness that life does not have to be at McDonald’s, it can be a sandwich in a nice park in a little village you are learning about,” she says 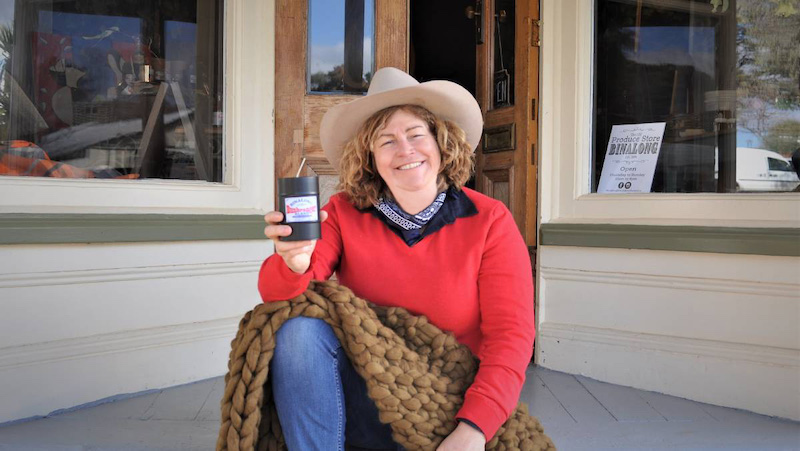 Near Binalong, Mount Bobbara rises sharply above the surrounding, undulating countryside. On top of the mount, a radar tower helps air traffic controllers manage one of the busiest air spaces in the world. You can walk up there if you are fit enough and from the top you will often see soft white ribbons of fog hiding hilltops below.

“All the locals go up there,” Cathy says.

“You see the radio enthusiasts that get up there with their two-way and try and reach Darwin with the radio reception. It is an access road for military to get up to the tower.”

The Old Produce Store previously sold rural supplies and before that it was a bicycle shop, dress shop, dentist, chiropractor and further back perhaps a produce store.

When the cooler weather arrives Cathy plans to extend the current Friday to Monday opening to six days a week. She is lobbying for better tourist signage to draw travellers to Binalong and surrounding Boorowa, Harden and Jugiong. She promotes other shops and believes collaboration is the best way to foster tourism.

Much has happened in Cathy’s life since her earlier life in the city, including stints in other country towns. The rolling landscape around Binalong reminds her of that special journey to Tumut with her mother.

“The people and their genuine hospitality remind me of Tumut and Aunty Fanny and Aunty Jane who had such hospitality and warmth. It was like a big hug,” she says.

“People forget that realism in a digital world, and it is very hard to promote. You just have to get people here to Binalong and then they either get it or they don’t,” she says.

“Luckily, everyone that’s come has got it, has understood. And of course, I can hear the trains going through sometimes.”