Soul Cartel Farr Side Cafe: Home of the biggest burgers in the Capital! The biggest burgers in the Canberra! Photos: Sophia Brady.

Over a year after opening in the leafy Southside Isaacs shops, Soul Cartel Farr Side Cafe has quickly become a beloved suburban gem known for a good feed and the biggest, juiciest burgers in town.

Having started off with a food truck at The Hamlet in Braddon, Soul Cartel owners – father and son duo Darren and Zack Goddard, and friend Pete – share their food philosophy and the origins of this humble eatery with a lotta soul. “[It] started as a few close friends and family who have a passion for good food, especially all things American.,” Zack said.

“Pete had started doing his own catering service and noticed a van at the Hamlet was for sale, he contacted Darren about going in on it together, and coincidently I had just left my job at the time and decided to get in on the action as well. After a couple of months of planning and behind the scenes work, Soul Cartel was born, and since then we have gone from strength to strength and building a solid name for ourselves and being part of such events as Spilt Milk, Groovin the Moo, The Commons and Sunset Cinema. Most recently, we have been given the opportunity to have our food van out at GIO stadium for all the Raiders and Brumbies home games this season and one at Manuka Oval for AFL games,” he continued. “Our menu at Farr Side (in Isaacs) is inspired by a broader American cuisine, focusing particularly on all things burgers, rather than just on southern Cajun creole theme we had at the Hamlet,” Zack revealed.

“The menu is also inspired by the food we love to eat and cook in our own time, I have always believed that if you’re cooking something you love it will reflect back on the customers.

We really take pride in keeping things fresh and new, so we run fortnightly specials that often consist of 4 – 6 different burgers and dishes that we’ve been brainstorming and trialling throughout the week. We use the feedback from these specials to help shape our next menu.”

Currently, the cafe has plenty of outdoor seating, making the most of the lush pine forest views of Isaacs while channelling their original start at the Hamlet with the causal alfresco vibe. Open for breakfast through to lunch from Tuesday to Sunday and dinner where BYO is welcome from Tuesday to Saturday, the menu consists of burgers, hot dogs, tacos, sides and a rotating range of specials. Zack (who is at the helm of the kitchen) has a knack for outlandish original food creations that are hearty and comforting. His sides are inventive and the burgers are delicious – fat, juicy and made to satisfy an appetite!

“Our most popular item at the moment is definitely ‘The Beast’ which is one of our current burger specials. It consists of a Bread Nerds brioche bun, 150g beef patty, buttermilk fried chicken, double bacon, quad melted American cheese, layers of crispy onion rings, slaw, pickles, shaved red onion and chilli aioli. With the way it’s selling it will definitely be on our next menu.”

“The ‘Southern Dumplings’ (which are shredded buffalo chicken, cream cheese, shredded cheese and shallots in crispy fried wontons with blue cheese sauce) have been a stand out of our ‘to share’ part of the menu and of course you can’t look past our classic ‘Dirty Fries’: Twister fries, gravy, melted cheese, and shallots.”

With the success of bringing back some life to the neglected Isaacs shops under their belt, Soul Cartel has no signs of slowing down their growth, with Zack revealing: “We’ve got a lot coming up for us in the near future, most notably we’ve taken up tenure at the canteen at the AIE (Academy of Interactive Entertainment) at Canberra Technology Park in Watson to bring ‘Soul Cartel’s ol’ school cantina’ which will do the same style food as Farr Side. We will be working hard over the next month or so to have that set up ASAP, so keep an ear out for the launch of that (it is available to the general public as well as the students/workers).”

“We’ve also got a small BBQ shop collaboration happening at the new niche markets at Fyshwick Markets with our friend and fellow caterer Hector Asado, other then that we’ve also got a bunch of festivals lined up over spring/summer and then Farr Side will just keep doing its thing building up bigger and better.” 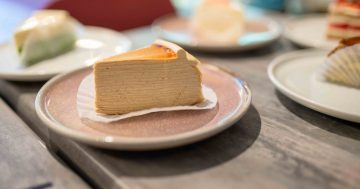